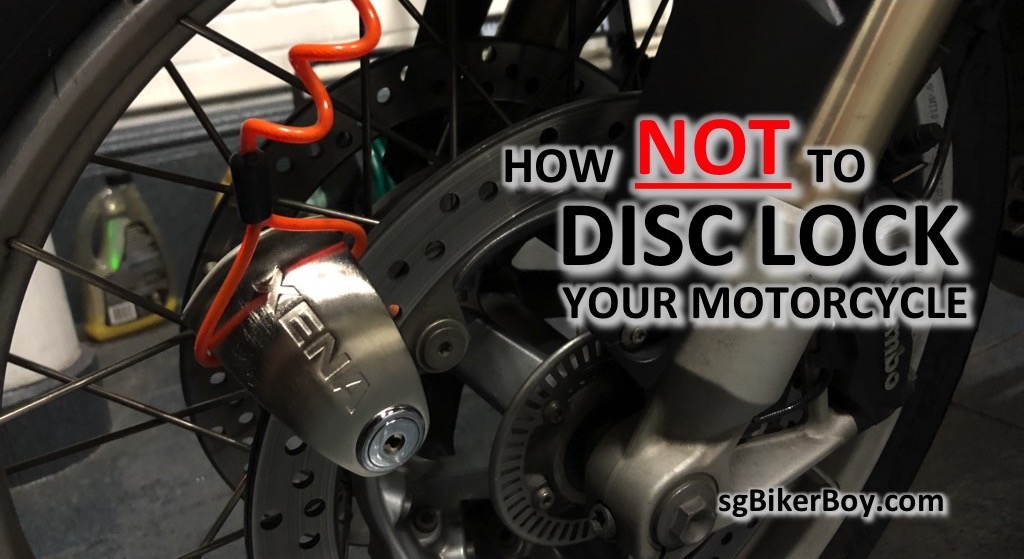 Keeping your motorcycle safe while touring in a foreign land is important. The bike is, after all, not only your primary trip companion, but could be your only transport home too. A simple disc lock may be enough to deter the casual thief from stealing the bike – although it won’t stop the really determined ones from lifting it onto the back of a truck.

But, is there a “wrong” way of doing it?

In my recent 1000 Corner Malaysia ride, a fellow riding buddy had a brilliant idea he picked up from a YouTube video. To make it really difficult for the bad guys to brute force crack the disc lock by drilling it, lock it such that the keyhole opening is facing the INSIDE of the brake disc instead of the usual OUTSIDE.

Bike secured! And so we locked up our bikes for the night and went to bed.

It was not until next morning at 5am that he realised what a terrible decision that was! Now, to engage the lock, all he needed to do was to push down the locking mechanism – no key needed. It was only when he tried to unlock it by accessing the keyhole from the OTHER SIDE, that he realised that the cast wheel’s spoke is in the way, and that there was no way for him to turn the key!

The brake disc turns with the rims, and there is no way we could move it to give enough room for the inserted key to be turned. With a few different sets of hands trying, we eventually gave up after about 1/2 hour of struggling with the lock. Thankfully, this wasn’t an alarmed lock! That would make a really uncomfortable and awkward situation!

We were afraid of breaking the key and getting it stuck inside the keyhole. That would mean an expensive brake disc replacement. So after staring at the bike, lock, and rims for a long while like trying to solve some puzzle, we eventually came up with a brilliant solution – trim the key so that the rim doesn’t get in the way.

But wait! It’s 6am in the morning and non of the shops are opened.

And so while the rest of the team rode up the highlands, our poor dear friend was stuck with a SECURED bike and had to wait for the workshops to open.

And so our poor friend missed the highlight of the trip – the 1000 Corner Malaysia – riding up the highlands around KL.

Well, thankfully he eventually got it to open. And at least he got some shopping and massage time in the city too. =P

4 thoughts on “How NOT to Disc Lock Your Motorcycle”