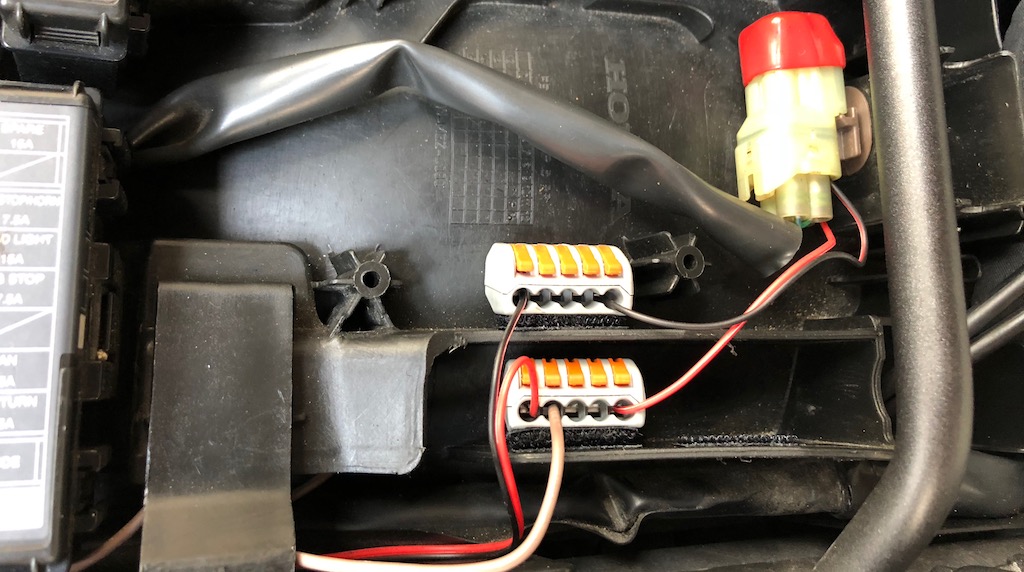 Having recently purchased the Honda CB400X, I’d love to have the option of adding on electrical accessories. I have previously wired up my Pulsar 200NS and added a relay and a fuse to help isolate the circuit from the rest of the bike’s electrical system. The main reason being that if an add-on accessory fail and short circuits, you don’t want it to affect the bike’s other electrical system.

While researching on how to wire up the CB400X, I realised that Honda has already included a fused ignition-on feature built into the bike! No messy relay needed! And this is done via the 4-pin MT090 options plug found underneath the seat.

That’s easy! All I really needed to do is to get some MT090 connectors to hook up to the Options Plug and then wire it to a couple of PCT-215 connectors for power distribution. For higher power devices such as the fog lights, I’ll add an additional in-line fuse for protection.

There are FOUR wires on the MT090 Options Plug – PURPLE, RED, GREEN and GREEN. PURPLE supplies 12VDC when the ignition is turned on; RED is always-on 12VDC; and the two GREEN wires are basically electrical ground.

Interestingly, when I measured the supplied 12V voltages (both the PURPLE and the RED), they seem to be about 0.3V lower than that measured directly across the battery terminals. I suspect that Honda has placed a protective diode across the paths which contributed to that measured 0.3V voltage drop. In any case, that minor voltage drop is unlikely to affect the hooked up electrical devices.

Viola! I now have a fused electrical tap-off point on the CB400X. Easy peasy!

2 thoughts on “Wiring up for power on the Honda CB400X”