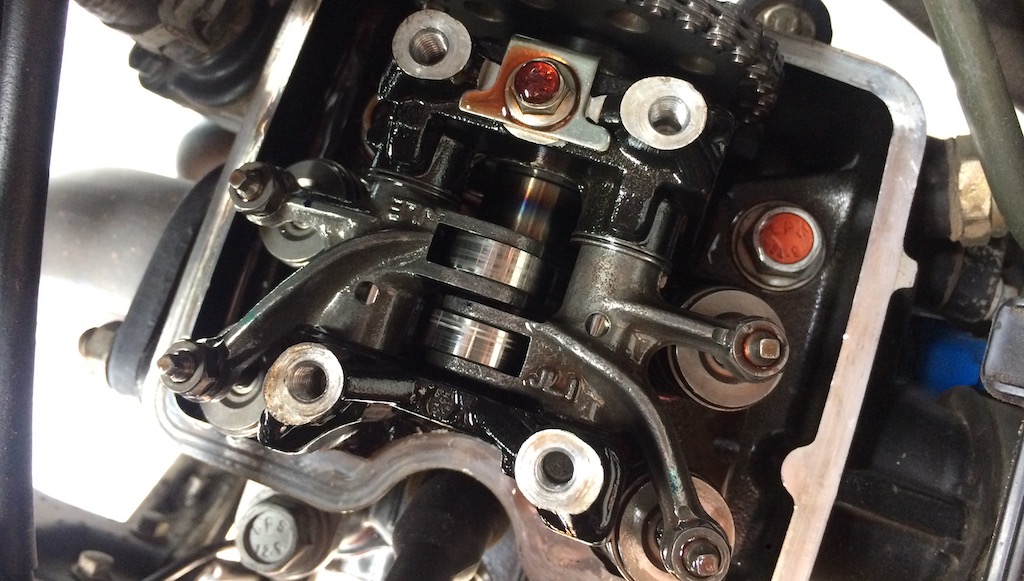 It’s been 14,000km since I had my engine top rebuilt in Chiang Mai and I’ve not done the valves clearance check on my Pulsar 200NS. And since it was the Chinese New Year holiday and I’ve completed my CNY visiting, with some time at hand, I decided to DIY the valve clearance check this afternoon.

To get to the valves, the following has to be removed: tank cover, fuel tank, air filter box, and then the valve head cover. I’ve previously blogged about the removal process of the above.

After removing the 4 bolts on the engine head cover / valve head cover, carefully remove the cover taking care not to damage the gasket. I visually inspected my head gasket and found it to be in excellent condition (approx 6 months old), and although I bought a new piece for this procedure, I had decided that it was good enough to re-use. I’d probably replace it if / when it starts to leak.

After removing the valve cover, the next step is to get the engine to top dead centre (TDC). To do this, open up the TDC inspection window cover on the left hand side of the engine casing. Using a 12mm socket, turn the cam sprocket clockwise until the TDC-line aligns with the centre mark.

The service manual also calls for the visual inspection of the “T” mark on the cam sprocket to be at the TOP and that the 2 horizontal alignment marks to be parallel to the engine case. But due to the position of the engine being mounted in an awkward manner, it’s blocked by the bike frame and very difficult to inspect. I did manage to spot the “T” at the top of the cam sprocket though.

I didn’t have to adjust the valve clearances this round. But if necessary, you’ll need a 9mm wrench and a pair of needle nose pliers (in lieu of a “special tool”) to hold the adjustment screw in place while you tighten the 9mm locking nut.

With the valve clearance checks done and a piece of mind, I’d probably schedule for the next check again after 10,000km.

Assembled everything back in reverse order and checked my watch. The entire procedure (including some simple fuel hose mod) was completed in just 1hr.

Say! It wasn’t that difficult after all!

11 thoughts on “Valve Clearance Check on my Pulsar 200NS”