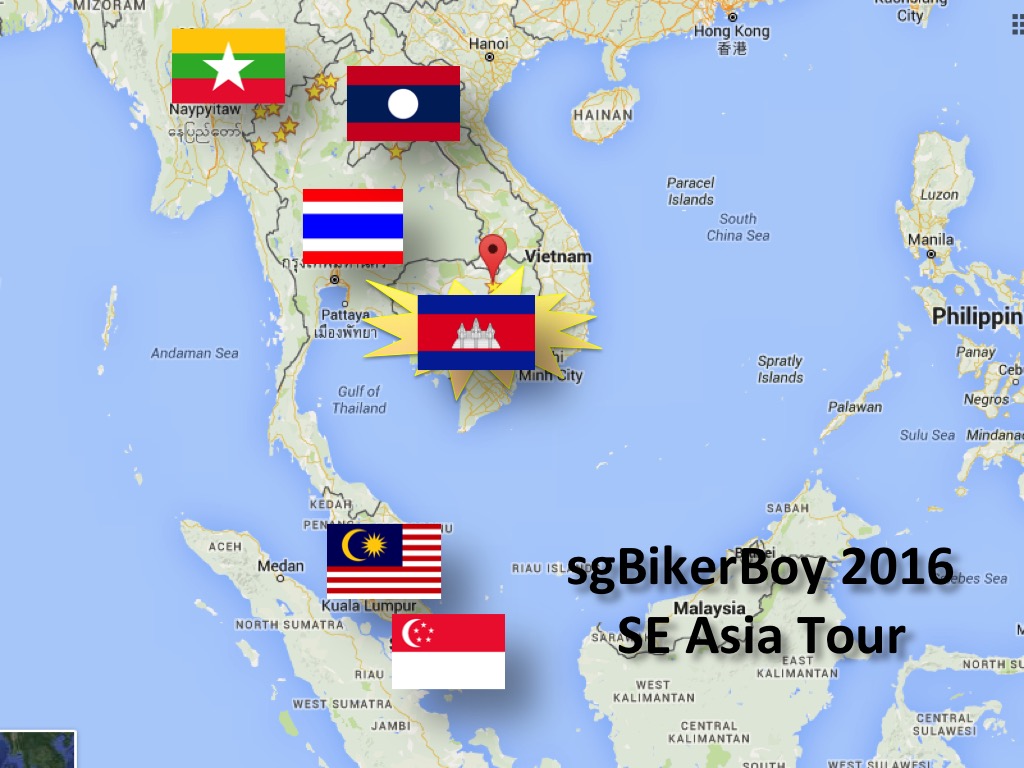 22 July 2016, Friday. I made it into Cambodia! After hearing all the horror stories of travellers getting turned back into Laos, or worse, getting stuck between borders in no-man’s land, I was a little worried about crossing this one. But then again, it wasn’t an easy experience, and I was almost turned back into Laos.

As I only had 100,000kips (approx SGD17 or USD12) left on me, I decided to head to the little town of Nakasong to get some more Kips. The border officials at the Laos-Cambodia border are notoriously corrupt, and I needed to make sure I had enough cash for their “service fee” or “donation” to make things move along.

But before all that, I needed to get some stuff done on my bike. I asked the 2 motorcycle servicing shops in Nakasong if they sell motorcycle chains, as my current chain is showing some signs of uneven wear. No joy. It was also about 2,000km from my last oil change, and was about time to replace the oil (new engine EO change routine). The first shop refused to touch my bike, and even seem to tell me that he will sell me the engine oil, but I’ll have to replace it myself. Needless to say, I walked away. The 2nd shop was willing to do the engine oil change for me at no additional cost – other than the cost of the oil itself, which was 30,000kips per 0.8L bottle. So I got myself some new oil for the Pulsar.

Over breakfast, I chatted with a local who took interest in my bike. And when I shared with him that I intended to go into Cambodia this morning, he shook his head and said, “No motorcycles into Cambodia.”

“Cambodia no allow motorcycle in. Can park in Laos, and walk in Cambodia. Then come back to Laos for your motorbike.”

Oh oh. Not the news I’d like to hear. A local who lives so near the border seem to be confirming the reports I read online – crossing this border with a motorcycle will be problematic.

So I went back to my room to pack my stuff, and was deciding if I should trod ahead or turn back around and head into Thailand at Pakse. I decided to give it a try anyway.

Headed to the town of Stung Treng – the nearest Cambodian town from the Laos-Cambodia border. It was slightly below an hour ride to town. Bought some Riel at the bank, got myself a room for the night, and new sim card with data plan – the usual drill when entering a new country. Oh, USD is accepted directly at most places, although I changed it to Riel’s at a slightly better than typical rate of 4,000R to 1USD. But my Laotian Kips were practically worthless here. They would sell Kips for 0.504 and buy them at 0.384. That’s a freaking wide spread!! Probably the 2 most useful currencies here (apart from Riel) would be USD and THB. Expect super lousy spreads for most other currencies.

Parked my bike in the hotel and went walking along the streets. I spotted almost no tourists. Although buzzing with locals, Stung Treng is very much untouched by tourism.

Had dinner at a local restaurant – which was really difficult to find. It seem that the concept of eating out is not very popular here. And just after I finished me meal and paid up…. pop! The ENTIRE TOWN went black. Yup! Electrical blackout. THE WHOLE FREAKING TOWN! I think this is probably a typical experience, as I spotted some random spots of battery-powered lights in some of the more well-prepared shops.

I took my time to walk back to my hotel. About a 5-10min walk. And just as I reached my hotel. Lights started coming back on.