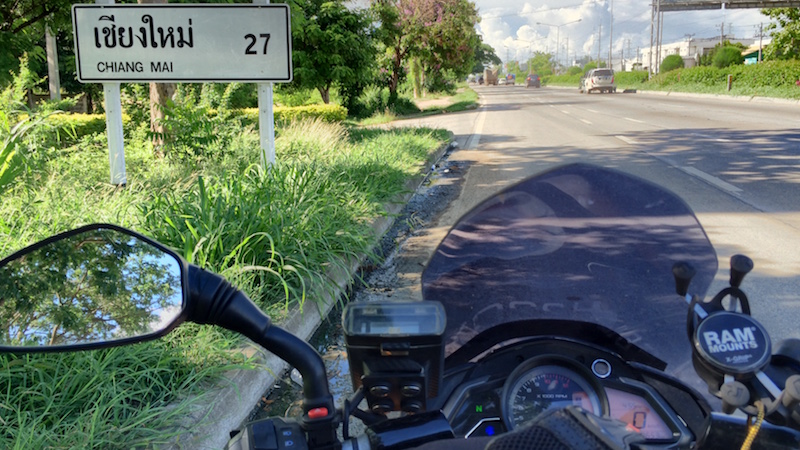 Probably due to the bumpy Thai roads, the Bajaj Pulsar 200NS seem to be falling apart here and there. =(

The chain was loose (again!) this morning. With a little bit of effort, I managed to tighten it back up. It could have come loose because at the last adjustment, I was cautious of over-tightening the rear wheel axle nut. This time, I made sure the rear wheel axle nut is tight, really tight. After 2,700km of travelling, anything not tightened up properly is beginning to work its way out. I found 3 out of 4 bolts of the rear passenger grab bar coming loose. One has even worked its way out so much that it could have just dropped out anytime!

Great! As I’ll have to pass Tak again to get to Chiang Mai, so I thought I’m now all set to enjoy that mountainous twisty road I didn’t get to enjoy 2 days ago due to unpreparedness, rain, and low, low fuel. Wrong! Barely 10 mins into the approximately hour-long route through the mountain pass, my tachometer reading went bananas! Initially, the tachometer needle was jumping all over the place. And then it settled at ZERO – not registering the engine RPM at all – although I was pretty certain that the engine was still alive. Next, the throttle response started acting up, and the engine was coughing away and died multiple times.

Oh great! In a mountain pass?! With the bike’s erratic throttle response, I initially suspected a wiring issue on the RPM sensor connection. The CDI isn’t getting a proper reading and is firing the spark plugs wrongly. It wasn’t just a display issue – else the bike would be functioning normally albeit without the ability to display RPM. In fact, there were a couple of times I heard a loud pop from the engine – suggesting wrong spark timing. But I didn’t know where the sensor was. My first thought was to drop a message to the folks at Pulsarian Singapore Facebook group to ask for help. But there was no mobile reception in the pass! Great, oh just great!

There was no shelter around where I could safely (and comfortably) troubleshoot the bike. So for the next hour or so, I limped my way out of the mountain pass, hoping to reach the next town for some mechanic’s assistance and constantly waiting for the mobile network signal to come back on. And in that miserable hour, random thoughts filled my mind.

“What if it’s more than a wiring issue?”

“Is it a chaffed wire? Oh dear, I didn’t pack any wire as spares.”

“Is it the RPM sensor? Do I need to ship an RPM sensor in?”

“Gasp! What if it was my CDI that failed?”

“If I have to wait for parts to ship, perhaps I could rent a bike and explore the vicinity?”

And so, it was an agonising hour limping along, and even having loaded trucks bypassing me. I was in motorcycle playground. But I couldn’t play. =(

When I finally got out of the mountain pass roads, I spotted a highway rest stop and turned in. Found a shady spot and parked my bike. Tried to search for the RPM sensor but I didn’t know where its located. Then, by intuition, I opened up the rear seat and looked at the CDI. Removed it and gave it a good shakedown. Re-seated the connector and prayed.

Viola! The tachometer’s needle came back to life! And the engine was acting normal again! Thank you God! The CDI’s connector must have jumped itself loose on one of those bumps. Thankfully, it was just a wiring connection issue. No show stoppers here. Phew!

So it was lunchtime, and I pulled into one of those restaurants along the highway. Incidentally, this one serves Vietnamese food.

The Thai Elephant Conservation Center is the only government-own elephant camp. When the Thai government placed a ban on logging in the forest, many elephants suddenly found themselves out of job. Forest Industry Organization then started this conservation centre to re-purpose these elephants and to study them. The place also house the National Elephant Institute of Thailand and an Elephant Hospital for the sick ones.

And finally! After 6 days of travelling (and rest stops along the way) I’m here in Chiang Mai! The basecamp of the Mae Hong Son loop. Checked into my hotel room – which is on the 6th floor. Thankfully, this hotel comes with lifts.

I washed up and rested a little while, and before long, it was dinner time. And I was hungry. But….

It was raining! No! Pouring! So I decided not to ride, borrowed an umbrella from the hotel reception, and walked to the nearby shopping mall. There was water ponding everywhere. My waterproof Sidi riding boots held up really well! Even when submerged in water up to ankle height, my feet remained dry. But my jeans… not doing so well.

Tried the packet of chrysalis – didn’t like them too much. There was some weird aftertaste. Not aroy. Haven’t opened the pack of acheta yet.