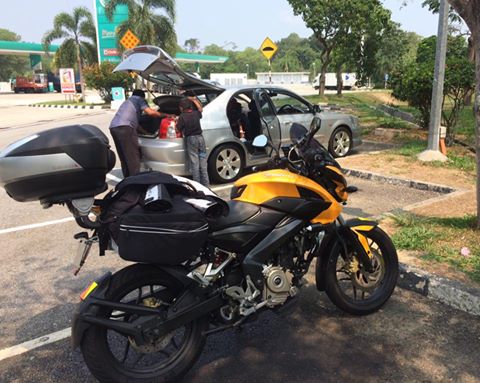 It was an unexpected trip. But yes, I’m riding up to KL again. This time, I will stay over for at least a night. Since my last trip up was just a week ago, I’ve learnt much about my faithful machine, and a few things I wanted to try.

First, I’ve got myself some extra luggage space. Soft bag panniers! They mounted on easily and offered some much needed additional space on the storage-deprived bike. Unlike larger bikes or scooters, the 200NS comes quite literally with no storage space on it’s own. I’ve considered the hard-shelled side boxes, but being a new rider, I’d prefer the side-protruding storage spaces do not poke out any further than the width of my handlebars. This gives newbies like me a little more confidence weaving between stationary cars around town. I’ve twice accidentally hit someone’s side mirror. Of which, on one occasion, (I really don’t know how) even managed to brush a stationary car’s side mirror with my mounted top box! I always stop to check if I’ve left any damages, and flip back the mirror for the startled driver if necessary. So at least the soft bags gives me some slight assurance that I won’t be leaving any damage if the clumsy me does something stupid like that again. Of course, I’ve learnt to judge available widths alot better now. But unlike hard shells, the soft luggage aren’t lockable. At least not quite. So I have to make sure to only store non-valuables in there.

In my trip last week, you’d remember that I swear by using ear plugs on long highway stretches. I used one of those cheap triple-flanged silicone plugs and they worked decently well. I’m also a very light sleeper, so sometime ago, I bought a set of “higher quality” foam earplugs from Guardian (or was it Watsons?). I use it in my sleep as foam plugs tend to be a lot more comfortable than the rubber / silicone version. So in this trip, I thought I’d like to experiment using foam tips instead. Boy, was I in for a real surprise! I’d HONESTLY say that I almost couldn’t hear my engine noise at all! And when on the highway – TOTALLY no engine noise! It was in part due to the engine noise suppression, and in part due to the wind noise masking it. But I think these foam tips were designed to shut out specific frequencies – especially engine hums. They were designed for travellers trying to get some eye shuts on an airplane – notorious for it’s engine noise. And this worked perfectly for motorcycle travels! Unfortunately I’ve discarded the packaging and so I couldn’t post any pics here. But I’ll see if I come across them again and I’ll shoot some pics.

If you’ve read my previous road report, fuel brand / quality discernibly matters especially when riding the machine around its upper limits. I don’t think I can tell the difference (if any) between low and high quality fuels when riding 80kmh. But at near the humble 200cc’s max speed, every little bit inside the pounding ignition chamber counts. Every little bit. So this round, I filled up with some premium petrol to see what happens.

I started with an almost full tank of Synergy 8000 from Singapore – Esso’s highest-end fuel available. Took me to highway speeds, and I was easily cruising 130+kmh (indicated). Not bad, I thought. But this time, I had a little something extra inside that 12-litre tank. Now before I reveal what the Mysterious concoction that went inside my 200NS tank, let me start by saying that I generally avoid any kind of additives. I believe that many products out there are but mere snake oil. I’ve tried some in my previous vehicles, but not many worked. And it was especially important for me to do my research (mainly internet) before I would even venture to try.

When I needed to clean my first car’s 16-year old engine’s fuel system back then, I did some research. Yes it was an old car (COE-renewed car). So imagine all the accumulated gunk inside. I’ve found that Techron and Redline’s SI-1 fuel system cleaner had (and still have) very good reviews. I settled for Redline’s cleaner as Techron wasn’t quite available in Singapore back then. It made a huge difference in my (old) car, and I’ve been using it in all my vehicles since. I still use Redline’s SI-1 fuel system cleaner to help maintain the fuel system in my present car. And this was one of the first stuff that went into my 200NS fuel tank when I first bought the pre-owned bike which had about 23,000km on it. Truth be said, I did not feel any before-and-after difference on my 200NS. This could be a good thing – as it means that the fuel system on the bike is relatively clean. Since I have already bought the bottle of Redline, I’ve been adding maintenance doses into the bike’s fuel tank at every fill up… Until now…

I came across a bottle of Marvel’s Mystery Oil (MMO) and did some research of my own. Almost everyone who have used it swears by it and it’s been around since 1923. I picked up a 16oz bottle from Mustafa for $10.50 and thought I’d give it a try – since it was relatively inexpensive. Label says 4oz for every 10gal of fuel. That works out to be about 40ml for my 12L tank – approximately 1oz each fill up. So a $10.50 bottle can last me 16 fill ups – about $0.66 each shot. 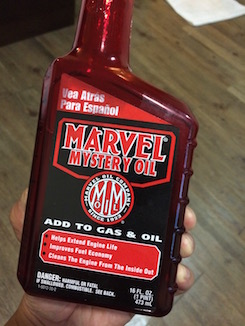 I was in for a nice surprise!

The bike immediately felt smoother and significantly less vibby – especially noticeable around the foot pegs area. I cannot comment about it’s “power”. I honestly didn’t feel any additional “punch”, but the buttery smoothness was just pure, pure joy, especially on the highway! It was like riding a renewed bike that has turned back some years of its age. And mind you, I’ve been running on “premium” oil too. As some of you might know, I’ve fed the machine Lupromax’s Razer 4T just about 1000km ago, and it still feels good. But with MMO mixed into the fuel, it just feels better!

Was this a psychological effect? Perhaps. So I set out to experiment. After running 230km of Singapore Esso’s Synergy 8000 + MMO, I reached Ayer Keroh’s rest stop. I filled up the tank with Petronas Ron97. Then I set off again. Perhaps the previous concoction of Synergy 8000 and MMO must have “cleaned” my carb, and so I don’t need any more MMO? Alas! Wrong! The typical 200cc single cylinder vibrations set in again – especially around the foot peg areas. Not “bad” per-se. Just “normal”. And so, after travelling for about 25km or so, I turned into the next R&R (the next Ayer Keroh stop – I think there are two). And since I brought along the bottle of MMO specifically to try out on this trip, I added the required dose into the fuel tank, and hit the highway again. Woo hoo! Buttery smoothness is back! Definitely not psychological!

From my research, I’ve read that Redline’s SI-1 is a fuel cleaner that is *also* a fuel system lubrication. I think Marvel’s Mystery Oil is a fuel system lubrication that is *also* a cleaner. Back in 1923, there were no fuel injection systems, and so MMO was specifically designed for carburetors. Importantly, when added to fuel, it lubricates the upper cylinder of the engine – parts where engine oil don’t come into contact with. So I’m guessing this is how it works. So perhaps my carb is “clean” (because the Redline cleaner had no noticeable effect on it) but just needs “lubrication”. This is but my only 2nd dose of MMO, and it might still be too early to tell. But for $10.50 a bottle and $0.66 a shot, I’m willing to continue to use it in my fuel. Might start using it in my car too, just to try it out.

So here I am, still in KL, writing this. Can’t wait for the 360km journey home to experience my “renewed” smooth, smooth, ride – smooth for a single cylinder at least.