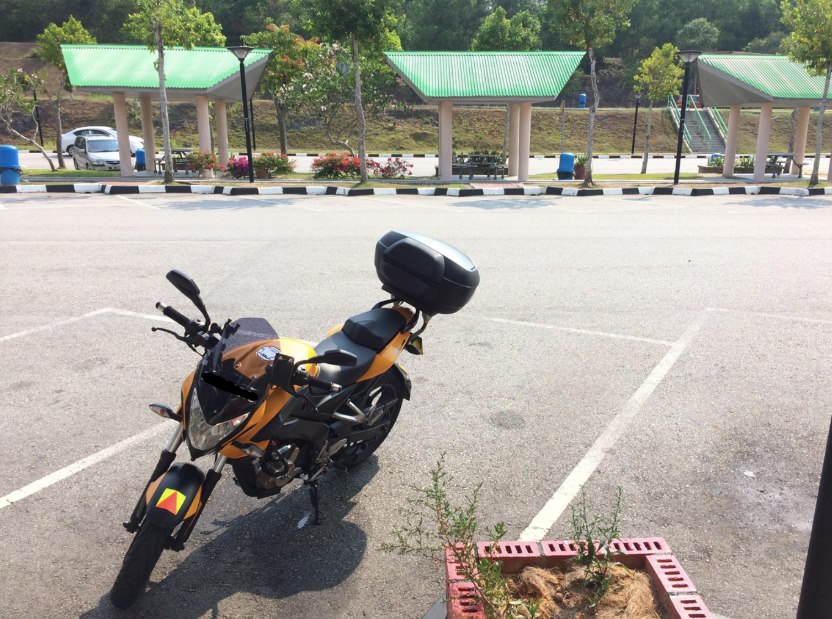 SG-KL-SG. Yes. It was a touch-and-go trip. I had some business to settle there and therefore the last minute trip. Left SG around 13:30 yesterday afternoon, and reached back SG around 01:30 in the night. Total distance – 760km. Couple of things I learnt about my 200NS from this trip:

1) The 48L Shad topcase was just barely enough to hold my stuff. I need to rethink about storage solutions if I were to make a similar trip again. Yes, it did hold my hand carry luggage (was initially planning to stay over for a night), rain coat, bike cover and some other small stuff. But I had to force the lid to close. Not good. Almost couldn’t squeeze in my bottle of chain lube – speaking of which…

2) I need a smaller can of chain lube! My super-extra-large Motul C2 almost couldn’t fit in the topcase after all the above filled up the spaces. I know Motul sells a smaller can that’s perfect for travelling. Will have to try to get that soon.

3) Travelling by motorcycle on the NSHW is cheap! No tolls and amazing mileage! I was deciding between driving or riding up. Ended up the latter as it was a new experience to me. I got a mileage of around 30km/l and spent less on petrol than I would spend on merely toll if I were to choose the car option. And I haven’t even considered the car’s fuel cost. Anyway, this mileage is less than the 40km/l that I used to get commuting in SG – which brings to to a point….

4) The 12L fuel tank capacity is barely enough to reach KL. Total one-way distance from my home to where I wanted to get to in KL is approximately 360km. The reserve fuel light comes on approximately around 220km or so. And before I hit 300km, it was already 1bar. Maybe because I am used to driving, and low-fuel light makes me nervous – especially on foreign land. So I have to top up at least twice between start of journey to destination – once around the start of journey, and another around slightly more than midway point. Based on my typical 40km/l consumption, I had initially calculated that the tank should be enough to reach KL. I was wrong. Then I realised…

5) The bike’s on full-open throttle significantly often. This affects mileage. This humble 200cc steed doesn’t stand a chance against the bigger bikes and crazy cars on the NSHW. I have touched and went beyond (speedo) indicated max speed (135kmh) many times. In fact, I was comfortably cruising around 130-136kmh (indicated) for most of the journey. We all know that the real speed is less than the indicated speed. Checked my GPS, and that translate to around 122kmh. This was around 8500rpm on gear 6. On a downhill, I once momentarily touched 143kmh on the speedometer. But that was about the limits of this triple-sparked machine. And since I was pushing the machine near it’s comfortable limits, I discovered that…

6) Brand of fuel DOES matter. I have always been a MY Shell supporter, mainly because I have the BonusLink card to collect reward points. Being cheap as I am, I have been feeding the 200NS with subsidised RON95 fuel. So on my way up to KL, I was comfortably doing 130-136kmh (indicated). But midway on the KL-SG run, I was running low on fuel and didn’t spot a convenient Shell station. So between Petron and BHP, I filled up some Petron RON95. Okay, full tank. Checked. And off I go, back on the NSHW. The moment I hit the highway, I could immediately feel the difference in quality of fuel. My 200NS obviously didn’t appreciate my broken loyalty to Shell, and struggled to even hit 130kmh! I was like.. “Oh oh, was there something wrong with my bike?” Full-opened throttle and I was doing around 128kmh indicated. Perhaps at next round, I’m gonna try some premium RON97 or V-Power to see if this machine likes it better. Speaking of “something wrong”…

7) What’s THAT blinking on my dashboard??!? As I was making my way back to SG, I noticed a blinking icon on my dash. At first I thought it was the service indicator icon. Then I realised it was LOW OIL PRESSURE!

First thought in my mind – SHIT!

Second thought – okay, I’m on Lupromax. Didn’t they say the bike can run with no oil? World record some more siah!

Third thought – wait… am I loosing oil or could it just be the oil pressure switch?

So I fired up my recently-modded hazard light and pulled the bike to the shoulder. After some fiddling for a flashlight-mode on my phone, I swung around to the right of the bike and looked at the oil level window. SHIT! I couldn’t see the oil there. It looked empty! After skipping 2 heart beats, I realised that the bike was on the side stand and tilted more than usual to the left (the road shoulder was already tilted slightly left). So I rested my only transport to bring me home on the centre stand, and rechecked the oil level. Phew! Oil level’s fine! Looked around a little bit more to check for signs of oil leak. None. Phew! Phew! The oil pump is mechanical, and apart from a massive external oil leak, I’ve almost never heard of it breaking internally. So with a healthy oil level, I assumed it was the oil pressure switch.

Fired up the bike again and miraculously, the low oil pressure warning went away. Never returned again for the rest of the trip. Note to self – get the pressure switch replaced at next opportunity.

8) Earplugs saved my hearing. And probably my sanity. It’s not only the engine noise, but riding at NSHW speeds produce tons of wind noise. No matter how great your helmet may be, always compliment it with earplugs. Sustained high decibels can damage hearing. I find that a noise-surpressed ride makes me calmer and enjoy the ride better. These stuff are cheap. Buy a few an throw them around your bike. They take up almost no space at all. I’m thankful that I brought extra as I accidentally lost my pair when I was in KL. I have a pair under my seat, a pair in my top case and a pair in my riding jacket pocket.

9) Riding jacket – checked. Riding pants – checked. Riding boots – nope. Was wearing sneakers. Bad choice. Rain water seeped in when I passed through several rain clouds. Thankfully it dried up when I reached KL. Perhaps I should have worn my SAF boots instead. Riding gloves – half checked. I have an issue with numbing thumb when I ride with full gloves. So I’ve switched to half-gloves and never experienced it again since. But at NSHW speeds, raindrops transform into tiny pellet bullets and were firing mercilessly at my exposed finger tips. So I’ll either need full gloves, a hand guard, or, like what I did, do a simple “forward tilt” of my wrists such that the gloved knuckles bear the brunt of the firing water bullets like a kevlar suit instead of my exposed fingertips. Not comfortable. But can do.

10) Dedicated motorcycle lane? Wow! I noticed that the MY bikers love to use the generously wide shoulder as a bike-exclusive lane. There were a couple of occasions where I joined them there. I found it to be a beautiful idea – being able to overtake the slower trucks and trailers travelling on the left lane, not exposing myself to the risk of being run over by some crazy speeding car on the right / overtaking lane, and not having to lane split between a monstrous truck on the left generating side wind blast and a crazy speedster on the right whose aim seem to be practicing knocking over a humble bike like some bowling pin. That said, I refrained from using the “bike lane” when travelling at night, as I continuously imagine myself mauling into some poor stranded soul who left his broken down vehicle on the shoulder.

So, that’s it! My 10-point notes on my first experience riding on the NSHW!

Drats! I need to do this again sometime soon!