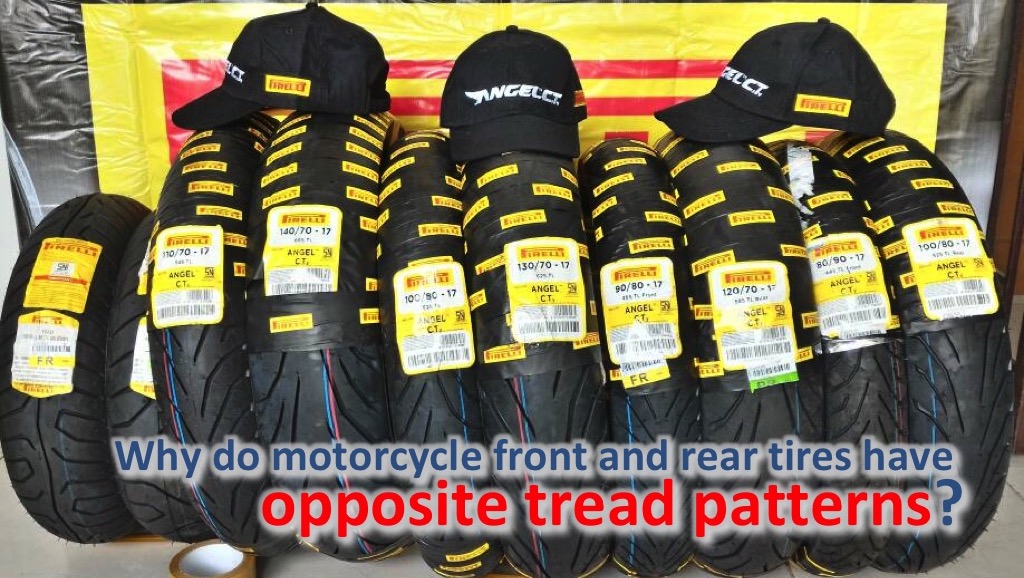 In such tires, not only is the FRONT and the REAR stipulated, the direction of travel is also inscribed onto the side wall. For proper installation, you’d want to install in such that the tires are rotating in the correct direction of travel when the motorcycle is moving forward.

The next question then is, why is it designed as such? The main reason is that the front and the rear tires experience different forces. The rear tire is primarily used for acceleration and propelling the motorcycle forward. Whereas the front tire experiences the greatest forces during braking. And thus, the treads are designed with these primary forces in mind.

Let us first take a look at the tread pattern on the rear tire. As the motorcycle propels forward and the tire rotates, and if the road was wet, the grooves on the rear tires are designed to “push water to the side”. This makes perfect sense as you want minimal water to get trapped between the road and the tire surfaces to maximize grip.

Then the logical question to now ask is – why does the front tire then appear to “push water to the centre” as the tire is rotating forward? Wouldn’t then this cause aquaplaning? What are the design engineers even thinking?

1. AERODYNAMICS
Firstly, you need to understand that aquaplaning affects motorcycles and cars in slightly different ways. At similar speeds, cars are more prone to aquaplaning as compared to motorcycles. Why? This is due to the vastly different shapes of the 2 vehicles.

Without going into the specifics of Bernoulli’s Principle, cars are shaped very much like airplane wings – also known as aerofoil (British) or airfoil (American).

At higher speeds, cars get “lifted” due to the pressure differences at the top and bottom of the vehicle as it passes through air. This explains that “feeling of floating” that many divers experience at higher speeds. Motorcycles experience this too, but to a much lesser degree. And the lift forces seem to just about sufficient to pull up the rear of the rider’s shirt and expose his Calvin Klein underwear, but not enough to lift the motorcycle. And thus, motorcycles experience less aquaplaning due to lift forces as compared to cars and other heavy vehicles.

2. HYDRODYNAMICS
Motorcycle riders all know that the front brakes are responsible for about 70% of braking forces. Now, if you hit the brakes hard enough, you’ll experience a force of being “jolted forward”. That’s momentum – a force you experience because a moving body tends to want to continue to move forward unless opposed by another force.

Recall that the forces experienced on the rear wheel (acceleration) and the front wheel (braking) being different? Now, imagine during hard braking, any water trapped in those tire grooves and between the tires and the road surface, experience the same momentum forces too. It would “want to continue” in the direction of travel. And because of this force, the front tire’s groove pattern “forces” the water away from the centre of the tire, thus INCREASING road to tire surfaces grip – especially important for braking in wet roads.

Especially, especially more so for the front tire – it might just save your skin when braking on a wet day.

60 thoughts on “Why do motorcycle front and rear tires have opposite tread patterns?”