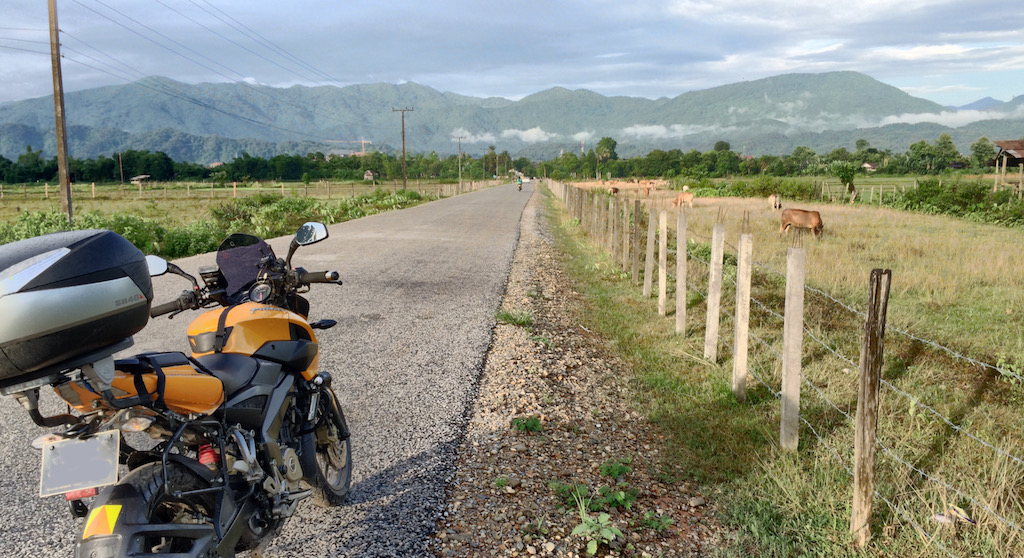 15 July 2015, Friday. I woke up with disappointment this morning. I had hoped for the weather to turn good and the fog to clear. But unfortunately,  the roads were still wet and the fog remained thick – not exactly the best conditions for motorcycle travel, especially on a mountain snake pass filled with loose gravel, sand and soil patches. But instead of getting stuck here, I decided to trod on.

So I packed my stuff, and hurled it onto my bike. Bid the nice staff at the guesthouse goodbye and continued my journey through the thick fog. At first, I was doing speeds of below 30kmh, taking extra precaution not to fall. I think my already injured patella will go if I impacted it the third time in 3 days. Thankfully, the roads started drying up, and the fog started lifting as I descended from the mountains towards Vang Vieng.

The roads started getting less winding as I approached Vang Vieng, and I managed to pick up some speed. Nevertheless, perhaps the recent drop was still fresh in my mind, I was still riding super cautiously.

And then I hit a patch of wet, slippery tar. It was like riding through a patch of oil spill, and I could smell the fresh stench of recently applied road tar. Steady, steady… you can do it… and I somehow managed to wobble through it without falling. Yeah!

And so, after getting a room and some lunch, the first thing I did when I reached Vang Vieng was to head to a bike wash – my very first bike wash in this trip. I had to get rid of the tar before it becomes permanent.

Vang Vieng sits somewhere in the middle between Luang Prabang and the capital city, Vientiane. While the northern towns of Luang Prabang and Luang Namtha seem to have a larg’ish population of Chinese (which makes sense as northern Laos borders Yunnan, China), the town of Vang Vieng seem to have a large population of Korean tourists. Even the many touristy signboards everywhere contain Korean characters to cater to this group.