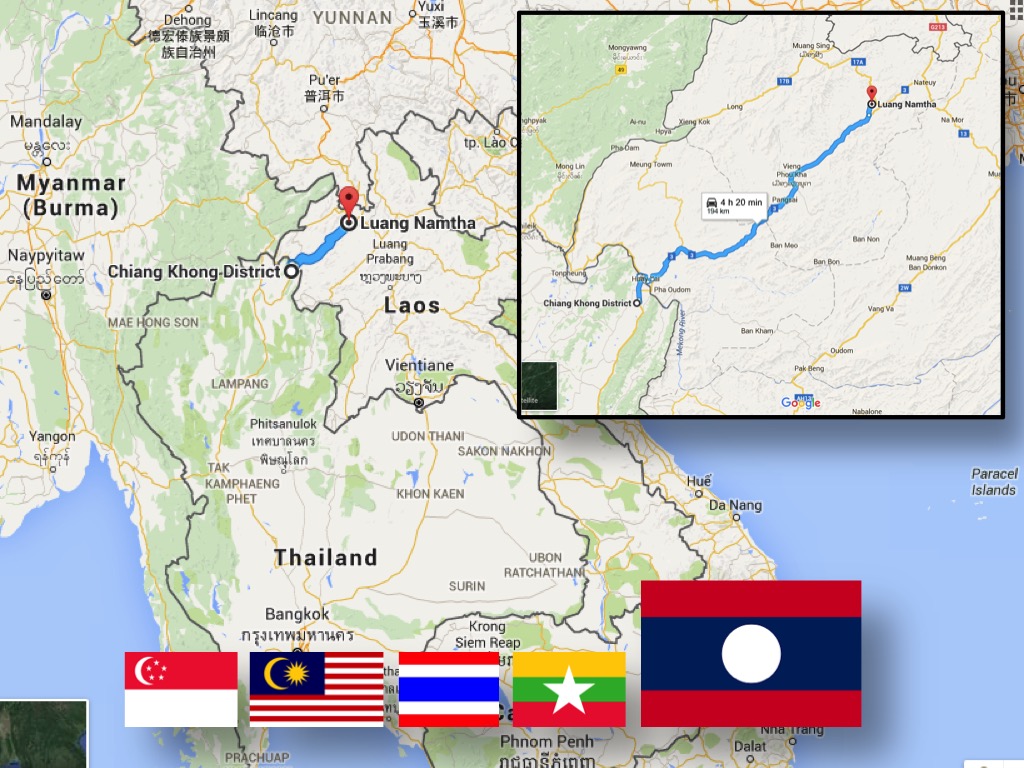 11 Jul 2016, Monday. If you’ve been following my adventure tracks so far, you might have guessed that I’m trying to head into Laos. So I woke up early this morning in anticipation of the typical border hassles, especially at these relatively remote borders.

Since I was in Chiang Mai, I used the Chiang Khong – Huay Xai border, aka Thai-Laos Friendship Bridge IV. Here’s what happened:

I needed some Laotian Kips, and so I rode to Huay Xai town – which is about 10km from the Friendship Bridge IV – in search for a bank. The notes here are ridiculous – I whipped out 200USD and got back over 1.6mil kips. I’m Laotian a millionaire! Feeling rich now!

Of course, the first thing I noticed when I entered Laos is that they now drive on the right side of the road. I had better get used to checking traffic from the correct side. Thankfully, traffic from the Friendship Bridge IV at Huay Sai border to Luang Namtha was very, very light. I think I spotted more heavy trucks than passenger vehicles.

Next, if you thought that the roads in Thailand were bad? Loas’ worse! The roads here are so laden with potholes – some of which were as large as my entire chest, and some as deep as 2 to 3inches – that it’s practically impossible to avoid. I don’t think they’re termed “potholes” – they’re practically “mini sinkholes!” So I had to brace myself every now and then. Potholes aren’t the most fearful stuff on the road – it’s the uneven road surface that runs PARALLEL to the road. Imagine a newly paved road surface. Now imagine that before its cured completely, trucks start moving on it, making depressions on the road. And then cars of varying tire widths also follow these tracks – effectively creating a somewhat rounded ditch along the road. And if the 2-wheeler bike gets into one of these “ditches”, you start to wobble like hell. Made worse is that you’ll find it extremely difficult (if not sometimes practically impossible) to get out of the ditch, as we all know to never attack a raised surface at less than 45deg, much less at an angle close to 0deg! Welcome to Laos roads!

Apart from the poor road quality, the view here in northern Laos is splendid! If you liked northern Thailand, you’ll absolutely love northern Laos! Scores and scores of greenery, carefully manicured paddy fields, and flanked by mountain ranges. I’m not sure if there’s Spring here in Laos, but if they do, I’m absolutely certain the flower bloom will make turn this place into a mini paradise!

Northern Loas seem untainted by tourism. The towns (more like villages) you find along the highway are nothing like those in Thailand. No guest houses, no nice restaurants, no advertisement signboards. Just basic wood and bamboo dwellings with very light touches of concrete. In most places, as you approach a major town or city, you’ll start to see buildups along the way. Human settlements tend to start around towns and cities and than expand outwards. But there was none here. So when I was approaching Luang Namtha, I was getting worried. Is this really a “major town”? Will I be able to find accommodation?

Finally got into Luang Namtha, and yes – I did manage to find a decent hotel room for 100,000kips a night. Luang Namtha is a sleepy town in northern Laos that’s very near the Chinese border. They don’t even have a supermarket here.

So it’s been 2 days since I collected my repaired Pulsar from Chiang Mai. And because it’s a rebuilt engine, I’m aware that I’ll have to do my engine oil change soon. Checked my odometer, and I’ve done exactly 555km since I collected the bike. In Thai, the number 5 is pronounced as “hah”. So 555 = hah hah hah! Oh! But I just realised I’m now in Laos, not Thailand.