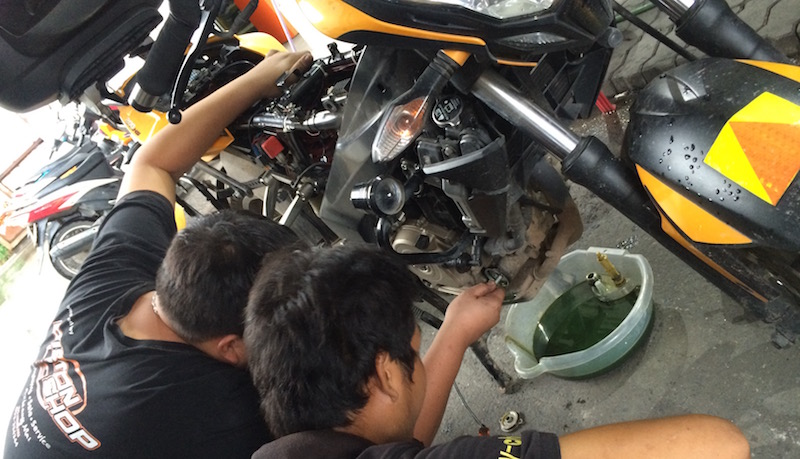 So I woke up in the morning and, as usual, went searching for breakfast. The Royal Peninsular was probably the nicest hotel I’ve stayed in Thailand so far. But at 650THB, it didn’t come with breakfast. Without my bike now, it gave me the opportunity to take things a little slower and I walked the morning streets in search for food.

So without much to do, I went back to my hotel room and caught up with my blog and some emails. Perfect opportunity for me to slow down the pace a little. The guys at Piston Shop had 5 bikes to work on before it was my turn, and Nat estimated that they’ll get to start tearing down only at around 5pm or so.

Just as I was about to head out to the streets, it started raining, and so I’m stuck in my room. Ordered a Pat Thai delivered to my room for lunch, and took the opportunity to do some laundry.

At about 5pm, I called Nat to find out if they managed to start working on the Pulsar.

“You should come over and have a look. There’s a big problem with your engine.” Nat said over the phone.

So I swung by Piston Shop and Nat greeted me with a grin.

“I don’t like that smile of yours” I said. “Something’s telling me it’s not good.”

Nat was pretty surprised at the failure, and told me that it was rather rare. A possibility would be insufficient engine oil, but I ruled that out as I told him I’ve always been very careful about engine oil levels. He did note that I was using an ester-based oil (the Motul 300V signature green), and ruled out poor oil quality too. He asked me about the bike’s mileage, and when he learnt that the bike has only done about 33,000km so far, he suggested that I seek for warranty cover on this part.

“But it’s a 3 year old bike, and the warranty is already over. It’s typically 1 year warranty in Singapore” I said.

“You can try. I had a customer on a Ducati Multistrada who had a conrod bearing failure. It was also around 3 years old, but Ducati covered his repair under warranty, as it was later determined to be a manufacturing defect.” Nat quipped.

“Yes Nat. But I believe a budget Indian brand and an Italian superbike brand have totally different concepts of warranty and reputations to maintain.” I replied.

As it was close to 6pm, we didn’t manage to tear the engine down to investigate further. This has to wait till Monday. Meanwhile, we discussed options between sending the parts over or shipping the bike back. Nat told me that he once knew of  a Malaysian rider who met with a rather nasty accident and had to send his bike back on a train. I told him that it’s not gonna be so easy for me as I have 2 borders to pass through. Also, Malaysia doesn’t have a dealership for Bajaj either, which means I cannot just send it to Malaysia and have them work on it.

The Pulsar 200NS engine design is based heavily on the KTM Duke 200 and shares many parts. In fact, the 2 machines are made in the same factory in Pune, India. I hope that whatever parts that we may need, the Duke 200 has an equivalent. While there is no KTM dealership in Chiang Mai, Nat informed me that there still is one in Bangkok.

“Cheer up! Enjoy Chiang Mai! At least it’s just a broken bike and not a bad accident!”

True. I guess we can only find out more come Monday.

Meanwhile, I tried to not let the incident spoil my adventure. Waited for the rain to stop and headed to the Saturday Night Market (or Walking Street as they call it).