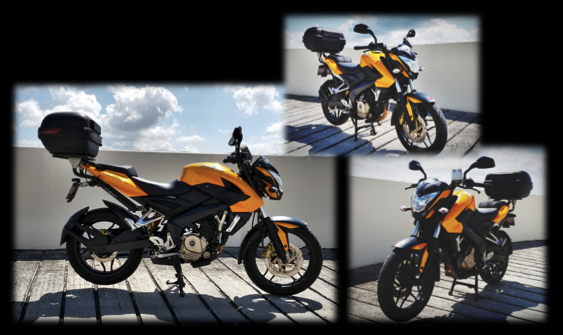 The advertisement for this bike on sale went up just earlier today. By the time I noticed it, it was already late evening. Called up the shop to check if they are still opened. Yes they were! And I headed there immediately.

Inspected the bike, asked a few questions, and the purchase decision was quickly made. I had been shopping around for a while now – even before I got my 2B license. So I’ve been monitoring the market prices and definitely know that this was a decently good deal. Of course, if there were any hidden gremlins within the bike, I wouldn’t get to know until after taking ownership. And so I gently reminded the shop about the Lemon Law and asked them if there were anything about the bike that I should know. They assured me that it was in a very good condition and that the previous owner bought a new bike from them and let this one go at a low price.

The bike was sold to me within 24hrs of advertisement posting. It was a “record” for the salesman. In fact, this same machine was actually reserved earlier by someone else. I commend the salesperson’s ethics actually. He told me that he had promised to hold the bike for this other buyer, and suggested that I called him tomorrow morning to confirm if the other buyer is going ahead with the purchase or backing out. But I asked if the buyer had at least paid a deposit or not. Nope! I was prepared to pay for the bike in full against my credit card without taking a loan on it. So when pressed a little bit more, I had the sales guy made a phone call to the other prospective buyer. Nope! He couldn’t commit then. So, the decision to let it go to me was rather easy. Haha!

It was already past the closing time when we completed the purchase paperwork. So I have to return the next day for collection. We still have insurance paperwork to sort out, and he promised to do a general servicing for me.