In this digital age, content appear to be abundantly available online. A quick Google or Yahoo (does anybody actually use this term?) for something, and you’ll find useful and relevant content. But did you know that in the internet world, it is estimated that only 1% of people GENERATE content while 99% of the people CONSUME it? It’s called the “1% rule” in internet culture. (See wikipedia article here.)

It takes time and effort to generate content – digital or otherwise. And after it is generated, have you actually considered WHERE you host that content?

You see, when I first got my Pulsar 200NS last year, I joined the Pulsarians Singapore facebook group. In my excitement, I admit that my posts there have been rather unconventionally long (Singaporeans call it “lor sor”, or “long winded”). Then I suddenly realised that my posts have been mysteriously disappearing – deleted by the forum admin(s).

Of course, that was disappointing. But that incident made me realise that I have to OWN the content and WHERE it’s being held. And so this blog started its life – bought the domain name, found a host, and hosted it myself. This way, I have ownership of the content AND the content’s container.

Then it happened again. My content evaporated on the Facebook forum. And what did I share that was deleted? The new tiered-ARF tax structure for motorcycles that was recently announced.

But I do have a good idea on who’s responsible and why my posts were deleted. It appeared to be personal. But I’m not about to discuss it here for privacy reasons. (PM me if you’d like to find out more.)

In any case, I seem to have worn out my welcome there, and should flee before becoming a pest. 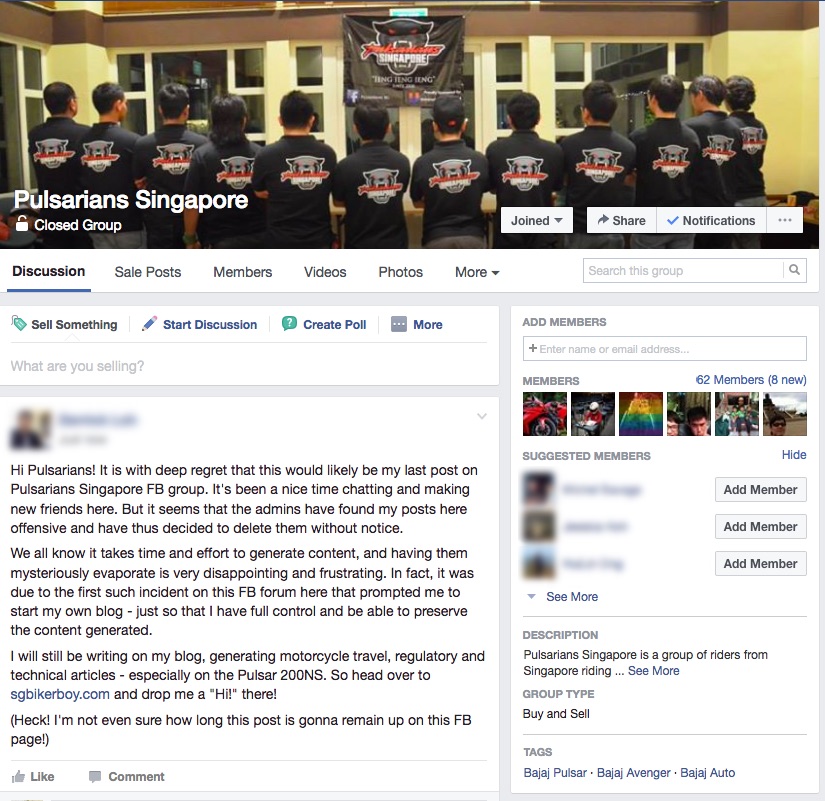 ← Singapore Introduces Luxury Tax on Motorcycles ← Lupromax, really? Why you so scared?