Two young boys were playing nicely. Sinbad and Malvyn were, in fact, brothers. In the midst of their brotherly play and without realising it, Sinbad’s left shoulder accidentally brushed against Malvyn’s right cheek.. The cheek, comprising mainly of soft tissue, hurt badly for Malvyn. Out of youthful spite, Malvyn raised his right hand and smacked on Sinbad’s left arm. Sinbad was caught surprised. He didn’t understand why Malvyn would deliberately hurt him. So, after a couple of seconds, Sinbad regained his composure and hit Malvyn on his right arm as revenge.

“Why was Sinbad hitting me again?”, Malvyn thought to himself. The sense of injustice was building up within Malvyn, and he retaliated with an even stronger blow to Sinbad’s right arm.

Before long, a fight escalated, and Mum had to step in to intervene.

Does the scenario above sound familiar? Yes, that’s exactly what is happening between Singapore and Malaysia regarding the toll and vehicle entry permit charges that both sides have been increasing in retaliatory responses. 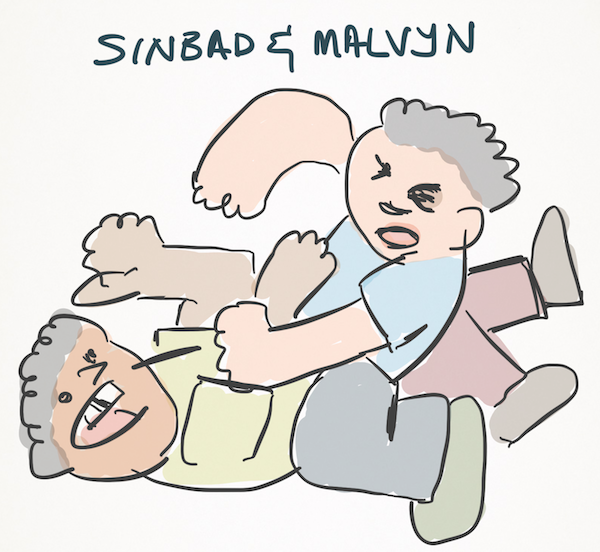 IT IS NOT ABOUT THE MONEY

As Malaysia and Singapore are separated by a body of water – the Johor Straits, they share 2 overland roads that link the 2 countries – the Causeway, and the Second Link. The cost of building these 2 link-ways was shared by both countries as it was believed that the ease of passage for motor vehicles would bring about benefits such as trade and tourism for both countries.

This is probably why: The Causeway and Second Link are co-built and co-owned by both Singapore and Malaysia. Toll fees are revenue-generating to the body who collects it. And Singapore’s position may likely be that you cannot simply take an asset that is co-own and shared by both parties, but have only one party collecting revenue from it, and then not share it equitably between the two owners.

Take for example if one decides to purchase an investment property and share it with a friend. At the time of purchase, both had agreed that it was a good investment opportunity and would wait for capital appreciation. Meanwhile, rental demand is low and the property remained untenanted. The friend then suggested that since the place is left empty, could she then allow her close relative to live in there for a couple of weeks. And you agreed. Subsequently, you discovered that the friend has been collecting weekly rent from the relative, albeit at a small amount. Remember, both you and your friend owns one-half of the property, but in this case, your friend gets to keep the full amount of the rent. Not a very pleasant feeling huh?

Singapore, being 50km wide and 27km deep, is a very, very small country. A population of 5.5mil people makes Singapore one of the most dense countries in the world. As such, to maintain reasonable flow of traffic, the Government of Singapore has always been discouraging the people from owning and driving a car. And they have done it very effectively by using economic policy – tax the people until an equilibrium is reached.

Singapore is known globally for having the world’s most expensive cars. Take for example a car that’s worth, say $30,000 on the open market (Open Market Value, or OMV). According to the Land Transport Authority’s webpage, the Additional Registration Fee imposed on this car would be $34,000. There is also a 20% Excise Duty imposed – which translates to $6,000. Before you can buy the car, you would also need to bid for a Certificate of Entitlement (COE) which grants you 10-years of usage. The current market value of a Cat-B COE is around $56,000. So if you add that all up, a $30,000 car would cost at least $126,000 – and we haven’t even included cost of shipping and dealer’s profits – which could increase the eventual price of a $30,000 car to somewhere close to whopping $150,000!

The message of the Singapore Government to the people is clear – “We don’t want you to drive. And if you do, be prepared to pay for it.”

And so the Singapore Government does what it does best – using economic policy to drive human behaviour. The Vehicle Entry Permit (VEP) was introduced to “equalise the cost of owning and using a foreign-registered vehicle in Singapore” to be somewhat closer to that of a Singapore-registered vehicle. But this is tricky. Singapore has to balance this approach of vehicular tax for the purpose of reduction of traffic congestions with that of continuing to attract tourism- and leisure-related travels into Singapore.

So then, how does Singapore do it? VEP-free periods and VEP-free days. Every foreign-registered vehicle is granted 10 VEP-free days per calendar year in Singapore. On top of that, during off-peak periods like weekday evenings (5pm to 2am), weekends and public holidays, foreign-vehicles also get to use Singapore roads for free. And quite frankly, usage beyond the 10 VEP-free days a year and on periods outside of off-peak periods, weekends and public holidays, this particular foreign-registered vehicle should then be considered “regular user” of the Singapore roads – and should be taxed appropriately to levels similar to purchasing a Singapore-registered vehicle.

The next question boils down to – how much to tax then? Within a 365-day year, there are approximately 261 weekdays. Subtract the 10 VEP-free days, and 11 public holidays in Singapore, the remaining 240 days should attract some form tax to equalise the cost of using the foreign-registered vehicle to that of a Singapore-registered one. Recall in the calculations above, a $30,000 car would balloon to $126,000 due to Government-related fees and taxes, but excluding shipping and dealer’s profits. So this means that $96,000 ($126,000 minus $30,000) of the total cost of the vehicle is attributed to Government taxes and fees. Because the COE system grants the car 10-years of usage, and if we amortise this $96,000 over 10 years, that works out to $9,600 a year. Divide that amount by 240 days that *should* attract VEP fees, it works out to $40 a day – not far from the $35 a day VEP fee Singapore imposes on foreign-registered cars entering Singapore outside the VEP-free allowances.

GREEN-EYED MALAYSIA AND THE PERCEIVED SENSE OF INJUSTICE

After the separation of Singapore and Malaysia back in 1965, the wealth paths of the two countries have taken very different trajectories since. It has long been rumoured that Malaysia is envious of her richer southern neighbour, Singapore. And when Singapore announced the increase in the VEP fees imposed on foreign-registered vehicles in 2014, Malaysia probably saw this as a profiteering move on Singapore’s end. So a couple of weeks later, on the 27th July 2014, Malaysia announced the increase in toll charges on both the Causeway and the Second Link, seemingly in retaliation to Singapore’s announcement of VEP-fees increase.

Recall in the above the “shared-revenue-on-a-shared-asset” principle? Singapore has a long-standing position of matching the toll fees Malaysia imposes on vehicles using the Causeway and Second Link. So, quite quickly, Singapore responded that they will match the toll-fee increase too. Remember, all these happened even before the *commencement* of the VEP-fee increase which was announced on the 1st July to be implemented on the 1st August 2014. The Malaysians saw that as a childish retaliatory blow. The Singaporeans saw that as an increase in cost to shop in inexpensive Malaysia. And the whole world saw two brothers fighting.

OR IS IT ABOUT THE MONEY?

In 2014, Malaysia announced it’s own version of VEP. It was meant to be implemented sometime in 2015, but the commencement deadline has been pushed back multiple times since. The official reason cited for the VEP introduction was to facilitate tracking and collecting of fines from delinquent vehicles entering Malaysia and flouting local traffic rules. So, not only is a VEP fee payable, but every foreign-registered vehicle has to register with the Malaysian Road Transport Department (JPJ). While the policy may appear sound on surface, many in Singapore were skeptical. It is not only about the data collection or the fee collection that the people in the southern island is concerned with, but the policy appears to be crafted as a weak workaround to a larger problem – bad Singapore-registered road users on Malaysian roads. So the question then begs – if that claim was true, would then the VEP system resolve the issue of the massive speeding and parking fines accumulated by errant Singapore-registered vehicles? Should then the Malaysian Road Transport Department not work on making the current fine collection system more robust so that errant motorists are compelled to pony up instead of introducing a blanket system that affects even the majority law-abiding motorists? The VEP approach certainly certainly appears to be a case of using a shot gun to kill an ant.

Online social media posts made by supporters of the Malaysian VEP system seem to suggest two broad reasons for the data and fee collection policy – tax the “richer” neighbour, and a retaliatory policy. “The rich Singaporeans come in and purchase our cheap petrol and groceries, and therefore should be taxed.” and “Malaysians pay RM98 VEP to enter Singapore, but we are only collecting RM20 from them.” are some of the more common online comments.

The Malaysia VEP message has, however, been somewhat murkier. Is it about registration and tracking of foreign vehicles in Malaysia? Is it about collection of revenue? Is it a retaliatory response to Singapore’s VEP-fee increase announcement? Or is it a message similar to that of Singapore – our roads are congested and we do not want you to be on the Malaysian roads? Of is it really about collection of revenue? (Whoops! Did I already mention that?)

CHOICE OF WORDS FEED FUEL TO THE FIRE

Compounding the Malaysian irk over the Singapore’s choice of the word “discriminatory”, is Singapore Minister’s declaration that Singapore “will match it in some form.” While Singapore’s position of matching any toll-fees imposed by Malaysia on vehicles using the two Singapore-Malaysia border crossings is somewhat accepted and understood, the above timing of making the statement didn’t go down too well with Malaysians. Remember, the sequence of events was – Singapore announced VEP fee increase, Malaysia announced toll fee increase, then Singapore announced toll fee increase to match Malaysia’s rates – and all these happened just days apart from each announcement. And so when Malaysia announced the introduction of VEP and Singapore’s almost immediate response of “discriminatory” and “we will match it in some form” most definitely didn’t go down well – not only for the Malaysians, but for some Singaporeans too.

And thus, the two boys began to fight.

HOW MUMMY WOULD LIKELY STOP THE FIGHTING BOYS

Mature analysis of the above situation would reveal a scenario of 2 countries implementing policies to serve their own purposes, but inadvertently getting into a perceivably tit-for-tat fight. The fight is not unstoppable and the situation appears more politically petty than brashly bleak.

I can imagine Mummy storming into the room and forcefully pulling Malvyn and Sinbad apart.

“Stop your nonsense, both of you!” Mummy commanded in her stern but loving voice.

“And you, Sinbad! Go take the other corner. If you have nothing nice to say, shut up. And if you need to say something, always remember this dear boy, the timing and choice of words you use will have very, very different impact on the message you send across. Sometimes, keeping quiet doesn’t mean consent. Keeping quiet doesn’t mean agreement. It may be ‘logical’, or it may be ‘a matter of principle’. But keeping quiet at the right time does reflect on your level of maturity. And so is occasionally choosing more palatable words to use.”

“Stand there. Face the wall. Until you are both truly sorry.”

← Lithium-Ion batteries in Motorcycles? ← Why do motorcycle front and rear tires have opposite tread patterns?